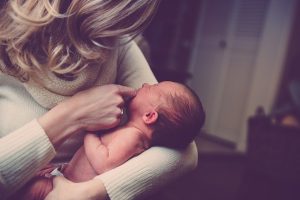 I was 17 years old when I realized I was probably pregnant. I instantly went
and told my aunt because I knew I could rely on her more than anyone else.
She’s someone I know I can trust and she’s my best friend. I knew she would
help me.

After work we went to Walmart to get a test and I took it in the
Walmart bathroom. The test was positive. I was in shock. I couldn’t
believe it was actually happening. I took another test when I got home to be
sure.

Originally, I didn’t tell my boyfriend because at the time I really
wanted an abortion. As horrible as that may sound, it sounded better than
going through with a pregnancy that I wasn’t ready for.

Me and my aunt went to the New Life Clinic and they confirmed I was pregnant with another test.

We went in a private room and we talked. I was very open with them, but I was
scared for obvious reasons. We talked about my options and what I could do.
They were on my side with no judgments at all, and it really helped me to
understand my options.

Later on, I got call from New Life and this lady who
was also helping sent me a video on how an abortion was done. That was
my turning point, when I knew I couldn’t go through with an abortion.

Most people who get abortions don’t look into it deep enough and they don’t understand
how it’s done. It’s brutal! I watched the video and balled my eyes out, and I
told my aunt about it.

Cheryl, from New Life Clinic, told me her own stories about adoption and showed
me a photo album. In the album I recognized a lady. I had worked with her daughter, who
later on became my best friend. Her mother knew a family who has been
looking to adopt and one adoption they tried wasn’t successful. The couple
could not pregnant and they had tried everything to have a baby of their own.

I met the family and I fell in love with them instantly. They are such amazing people who I
knew would love and take care of my daughter.

Adoption was the best and the hardest choice I’ve ever made. I knew I was not ready to be a mother and
even by giving her my best, she would still have a better life with this sweet family.

I woke up one morning and I felt kind of weird, later realizing that I was having
contractions. I called Cheryl and she and the Clinic confirmed that
I needed to get to the hospital right away. I got there around 10:30 and by 1:13 the most gorgeous baby was born. While the adoptive parents were waiting in another room, I got to hold my daughter and feed her for an hour, and then I said my goodbyes.

Her adoptive parents still keep me up to date, and Cheryl and the ladies at New
Life Clinic always check up on me and pray for me. Adoption is an incredible thing
to do, but it was the hardest thing I’ve ever done. I created something
amazing and gave these great people the family they had always wanted.

I chose the best option for my daughter and I’m insanely happy with my choice
thanks to the New Life Clinic!