How Social Media Can Ruin Marriages 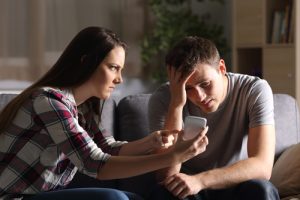 Sometimes I think our lives would be much better without the internet and the constant feeling of needing to be connected. Let me tell you a little about my almost ruined marriage by social media.

I was getting my three month old dressed up all cute so I could take his picture with his little three month sticker to post on social media. But I was interrupted by a message from some lady I didn’t know, and usually I would ignore the message but for some reason that day I opened it. And that message changed everything. It was an ex-employee of my husbands telling me that she had sex with him. I immediately felt sick to my stomach and confronted my husband who of course denied it. But I couldn’t let it go, how could I? That one message changed our marriage forever.

I couldn’t let it go because there wasn’t “proof” one way or another. Why would this lady randomly just try to ruin my life? After driving myself crazy I messaged the lady back and I wanted details. I wanted proof! All she gave me was the day and location that the “affair” happened. It wasn’t enough for me I wanted solid proof like a text he sent her or something. I drove myself crazy for weeks. I then begin pulling all nighters and going through his phone while he was sleeping, which is way out of my character! I had always trusted my husband without a doubt. I mean we have had our problems like everyone else but trust was not one of them. I began finding inappropriate messages in his phone from and to other female co-workers. And of course confronted him about all of the messages which was a huge eye opener for him. He apologized and said he never thought of the messages he was sending to be inappropriate until we had talked about it. My husband has always been an overly friendly and out going person but never thought of women taking it the wrong way. Well of course they do!

I kept hounding this lady for answers I felt like my family was on the line and she owed it to me! She eventually made up some story about how her ex hacked her account and sent me that message. And of course I didn’t believe her but the fact that she was backing out of what she said made me second guess her story. But the truth is I may never know the truth, I had to decide if I wanted to stay with my husband and try to make this work or let some lady ruin my kids lives. So I chose to work on my marriage but it has taken a long time to get that lady’s voice out of my head and to not let it dictate my marriage.

Now if this was 30 years ago that lady would not have a way to track me down and tell me she had sex with my husband but thanks to social media she was able to literally stalk me on facebook and try to ruin my marriage. In today’s world we are able to connect with ex’s or old friends that we would in reality probably never see again or give a second thought about if it wasn’t for social media. Sadly instead of working on your marriage, you can literally cheat on your spouse and its all done from your phone on social media. Thirty years ago that temptation would not have been there.

I have to admit social media does have its positive sides too though. We can reconnect with family that has moved far away or even join support groups to let us know we are not alone.

Be wise when using social media and never put it before your family. Never get so caught up in it that you forget who you are and what your priorities are!