I Didn’t Know What A Red Flag Was 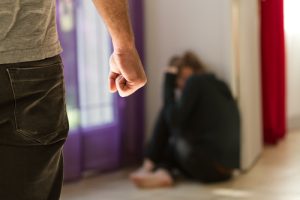 To say I was awkward growing up, that would be a true statement. In junior high I was the good girl who obeyed her parents and never did anything wrong. I was the definition of a “nerd” who had the glasses and braces to go along with it. Needless to say I never had the attention of any boys, and I was okay with that. Until the summer before high school started, I got contacts, and that fall I hit puberty and than spring my braces came off, that is when I started to gain the attention of the opposite sex.

There was a boy in a lot of my classes that started as my friend. We slowly started dating our sophomore year. This experience was new for me, to have a real boyfriend who took me out on dates and invited me to family functions.

Things were wonderful at first. He could drive, this was a big deal since I was only 15. My parents loved him and never gave me a curfew. We could do whatever we wanted and he made me feel safe. He would always tell me he loved me and how perfect we were together. Slowly things started to change…… and not for the better.

It started with teasing. He would tease with me and give me a little nudge. The nudges than got harder and slowly turned into little slaps. Nothing that ever hurt, but these nudges should have been a red flag. Needless to say I didn’t understand red flags; I was 15 and it my first relationship. I didn’t know what a red flag was.

Eventually I saw my boyfriend and his brother treat there mom with the same respect. I brushed it off thinking, this must be the way they show affection in this family….. boy was I wrong.

The next phase that started was the controlling phase. He didn’t like me talking to certain people because they were “dirty” or ‘trash”. If he caught me talking to them, or flirting (in his words), the slaps would get harder. He would say “You should’ve known better”, when I looked surprised at the arm grab, or the slap, I received after an encounter with a classmate. Before long, he was controlling how I dressed, my schedule, who I could and couldn’t talk to, what events I could attend etc. And the worst part was, I thought this was normal behavior for a boyfriend to be concerned on my well-being and didn’t realize what was really going on.

One day about 8 months into our relationship I had a migraine, the first one I ever had. And he yelled at me at the top of his lungs while he drove me home, and I was too sick to talk. That’s when I learned to get under his skin without doing anything wrong , just give him the silent treatment. It infuriated him like no other. When we got to my house, no one was home and he continued to yell/curse/scream and all I wanted to do was lay down. He picked me up and started to throw me around. That made me nauseous and when I eventually threw up, he said “Maybe you really are sick” and than started to take care of me. How can a guy go from hating me and throwing me around like a doll to tenderly take care of me and hold me? That’s when I started to question; maybe this isn’t right?

I tried to justify his actions by telling myself, he doesn’t know any other way, this is his way of showing love, he’s just looking out for me.

There was always a voice in the back of my head saying this isn’t right. But by this time my self-esteem was gone. I seriously thought he would be the only one who could ever love me because of how unattractive I was.

Through it all I thought he would never try to take my life, so I was going to be okay if I stayed with him but once again I was very wrong.

I don’t remember what we were even fighting about that day, but it was enough for me to use my go-to defense of the silent treatment. We were at my house by ourselves and were watching T.V. He was on the couch and he wouldn’t let me sit with him, so I was sitting on the floor. He kept trying to talk to me and I wouldn’t move, talk or act like he was even in the room. He got down on the floor and in my face. I looked around him to the T.V. and he lost it. His big hands wrapped around my neck so fast, I didn’t even know what happened. I was in shock but all I could think about was how I couldn’t breathe. I don’t know how long I struggled for, but the room started to spin and slowly darken. I remember thinking – wow this is it – he actually did it. And than……. my mom opened the front door.

I inhaled like I have never inhaled before and I started to cough uncontrollably. I couldn’t talk and when my mom asked what was wrong, he told her I choked on my water. If my mom would’ve noticed, I didn’t have any water in the room. But she dismissed it and went on into the kitchen. After that night, I broke things off with him and swore I would never put up with anything like it again. Its also a huge reason why I do not like being told what to do to this day.

Over the course of the year we dated, there are many stories of abuse that I could share. But what hurt the most is how that boy took so much from me. My self-image, my self-esteem, my ability to understand love. And as a christian I do forgive him and all his transgressions. I just hope he has asked for forgiveness from our Savior. Because it took me a long time to realize this, but God’s view of who I am is the only opinion that matters.