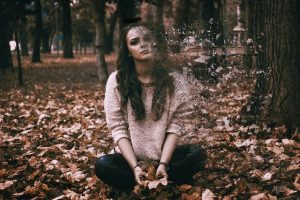 I was also 16 when I found myself in the same situation as Dee (If you do not know Dee, please see previous blog). But my story differs from hers in the fact that I did not seek the resources of a local pregnancy center. I honestly didn’t know they existed at the time. But I would like to think my story would be different if I had known, and went to one.

As a background, I was 16 and in love (weren’t we all?). But at 16, you don’t see the red flags. I blame it on the fact that my previous relationship was abusive in every sense of the word. So when the cute older guy looked my way and treated me like a princess – I was going to do everything I could to keep him – including having sex.

Who knew you could get pregnant the second time you ever had sex?!? Well it certainly wasn’t me, because that’s exactly what happened. I was the “Good Girl” who these things didn’t happen to. My eyes darted back and forth from the pregnancy test to the box because I knew that could not be a positive sign I was looking at. This box is defective and it was giving me the wrong answer! That’s when the panic set in.

I knew I couldn’t tell my parents, they were barely able to raise me, how would they be able to help me with a baby? I didn’t know pregnancy resource centers existed, so I confided in a friend. She very calmly gave me a telephone number and told me she had chosen an abortion and here was the number if I wanted to do the same thing. Abortion?!? My insides were screaming at me “NO!” and “It’s wrong”, but at the time, I did not know what else to do.

That’s when I told my boyfriend. His exact response was “I’ll support you in whatever you decide”. Whatever I decide? Wow, that was so nice of the guy who promised to be with me forever and love me unconditionally, to leave it all on my shoulders. (Another red flag). Hence why our relationship did not work out – way too many red flags.

In the end I chose abortion and have regretted it since. The experience led me to drinking, drugs and promiscuity – that then led to a date rape. I don’t say these things lightly. It took me a very long time to see the destructive path I was taking. I was fortunate to turn my life back over to our Savior Jesus Christ before anything further happened. And to Him I am forever grateful. His saving grace and kindness has led me to an amazing husband who takes me for my past faults and loves me anyway.

I was able to participate in the New Life Clinic’s first Whitestone Connection group for post-abortive women. The ladies of this group became like sisters to me that I will cherish forever. There is strength in forgiveness and hope for the weary. I plead with anyone who has made the same decision as me, and struggles with the decision (even 20, 30, 40 years later), to seek out the New Life Clinic peer counselors and learn more about the Whitestone Connection group.

“Whoever has ears, let them hear what the Spirit says to the churches. To the one who is victorious, I will give some of the hidden manna. I will also give that person a white stone with a new name written on it, known only to the one who receives it.” Rev 2:17 (NIV)