The Dream of a College Girl 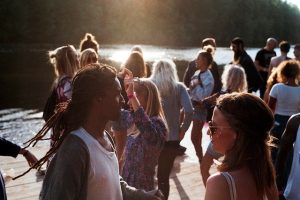 I’m not much of a dreamer. I tend to be more of a realist. But there was one dream that I had in high-school of how college would be for me. I would go to a University and fall in love with a handsome guy and we would get married and live happily ever after. We would bring our kids back to this University and tell our kids “this is where mommy and daddy met”. Cheesy right? But I honestly had that dream in my mind for years. So when I thought it was coming true, I was beyond excited.

I met Jeremy my Freshman year at college and he was by far the hot guy on campus. What a surprise
when I found out he was nice and had manners to go with the amazing smile. Bad thing was – I was in a
relationship with a guy from back home. I believe he was in a relationship with a girl back home as well –
but I honestly can’t remember that detail now. We were able to get to know each other that year since
we lived in the same dorm and had a couple study groups together.

Fast forward to Sophomore year, and we find ourselves both single at the same time. Granted – it
could’ve been my imagination but I swore the attraction made me feel like “Finally! We can be
together!” The first night out on campus, we went to a local bar and danced the entire night. I’m fairly
sure the sparks were real. He walked me to the doors of my dorm and kissed me goodnight. I think I
slept with a smile that night. The next few days are a bit of a blur but I know many of my friends were
telling me they heard he was definitely interested in me…….. I was walking on the clouds.

Soon after, his “house” threw a party and he made sure I knew to come. My friends and I were excited
to go since it was the first house party of the year. I felt safe walking in – they were by far the most
preppy house on campus which included a guy I knew from high school. I did have a few beers that
night, but I didn’t want Jeremy to think negatively of me so I made sure to only have a couple spread
throughout the night. Without a doubt, I was not drunk – not even close.

Jeremy was busy and wasn’t able to talk much, every time he tried, we were interrupted. Around
midnight he told me it was his shift to work the bar until the party was over. But he said I should go
home with my friends and he would call me the next day. My friends and I started to climb into our
DD’s car when Jeremy’s roommate Kyle came running at the car. He asked me why I was leaving and
that I needed to come back into the party with him. He told me how much Jeremy liked me and that I
should really stay. Kyle told me he would work the bar so Jeremy and I could spend more time together.

I replied “Abso-flipping- lutely!” I jumped at the opportunity to spend more time with Jeremy. I was
head over heals for this guy – and felt like my dream was really coming true.

Kyle led me back into the house, but this is where the story takes a turn for the worse. Instead of going
down to the basement (where the party is) we start heading toward the back of the house. Kyle said he
had a special stash of liquor and he wanted a shot before we went to the basement. In hindsight, I

should’ve had bells ringing off the hook in my head. But I didn’t. I was so naive to think that Kyle had
his roommates best intentions at heart. Even as we started going upstairs, I thought – maybe Jeremy is
up here for some reason. It wasn’t until we were in Kyle’s room that I started to feel uncomfortable. I
stood in the doorway and wouldn’t even enter because it didn’t feel right. He poured 2 shots of Malibu
Rum. One for him and he hands me one. I’m not a fan of shooting rum, but I took the shot hoping to be
able to get downstairs faster. But I didn’t. I didn’t even get back to the door before my world went
dark.

Next thing I remember, I’m laying down and it’s really dark. Kyle is panicking and shaking me awake
saying “you gotta get outta here!”. I only remember feeling so fuzzy and dizzy that I couldn’t figure out
where I was, who I was with, or what was going on. All I wanted to do was sleep. But he started shoving
me out of his room into a hallway which was filled with his roommates – including Jeremy. The look on
Jeremy’s face is one that will haunt me forever. He instantly went into a room behind him and slammed
the door. I still wasn’t sure what was going on – but I knew that wasn’t good. I was instantly sick to my
stomach.

I ended up walking back to my dorm that night still not knowing what happened. Somehow Kyle ended
up following me back. I assume to make sure I made it safe. I asked so many questions the whole walk
back. “What happened?” “Why is it so late!?” “How did I lose 4 hours?”. Kyle repeatedly just said “I
don’t know”. I crashed when I made it back to my dorm. I was so tired and couldn’t keep my eyes open.

The next morning I woke up praying it was just a bad dream. My instant messenger tabs told me
otherwise. As my friends and I were walking to breakfast I was informed that whatever chances I had
with Jeremy were gone and that I blew it. I told them all I didn’t know what happened and they said
“That’s what Kyle does. Don’t you know that?”

Of course I didn’t! Or else I would have had my guard up and I never would have went back into that
house with him. And these are the same friends who were riding home with me the night before – why
didn’t they warn me then? Why didn’t they make me get in the car if they knew that information?

In one night, in the matter of a couple hours, my dream was ruined.

So why do I share this? Because that night is one that I still dwell on to this day. I replay the events and
think “What if I would’ve done this differently?”, “What if I would’ve just got in the car”, “What if…?”,
“What if….?” Then I realize that I’m dreaming again, dreaming of a life that would’ve ended much
differently. So the realist me is going to tell you – watch your drinks. Watch your friends drinks. Never
assume someone is a good guy until you absolutely know for sure – and always have your guard up.

If you are a victim of sexual assault, or rape, it is a trauma that may need counseling. If you do not know
where to obtain those resources – feel free to contact the New Life Clinic and we can put you in touch
with someone who can help. Or if you just need to talk to someone who has had a similar experience –
we can help with that too.

In the event this happens to you in the future – please report it to the local authorities. This is a crime
and it needs to be reported. Do not feel ashamed, do not try to brush this under the table. It will be
something you will possibly regret not reporting in the future.